GILBERT KLINGEL — A Man of Many Talents 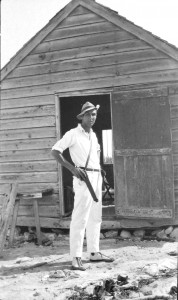 Klingel at the Inagua Field Station in 1931

Gilbert Klingel (1908 – 1983), a man of many talents, was an American naturalist, explorer, photographer, author, pioneer in underwater exploration, inventor, metallurgist, and a boatbuilder.      Of all these talents, however, he was first and foremost a naturalist and a writer.  He had a fascination for the natural world around him and could describe it in great detail with a literary style that makes scientific material interesting.   His inventions, as a pioneer in underwater exploration and photography made the study of marine life easier to observe at a time when few people thought it possible to spend extended periods of time below the surface of the water.  His later years, as a retired metallurgist, led him to build boats by the sea he knew and loved so well.

Klingel was a self made, self-educated Renaissance man, one of those rare individuals who could excel in almost any field.  He was an avid reader and when he wasn’t reading, writing, or exploring, he was building.  He could build most anything from a small piece of furniture to a large seventy five foot boat.  When he needed a piece of furniture, he made it; a home, he built it; a boat, he would construct one.  He began by building these out of wood and later in life when he learned how to work steel, he would build out of steel.  He designed and built an electric lawn mower when only push mowers were available.  In later years, he built his own elevator for the apartment above his boat shop.  This elevator is still in use today.

Klingel is known for three books and many articles.  Inagua (1940, 1961, 1997, 2010), also entitled The Ocean Island, was the result of two scientific expeditions to the Bahamas.  In The Bay (1951, 1984) Klingel gives his wonderful observations of sea life in and around the Chesapeake Bay.   His third book, Boatbuilding With Steel (1973, 1991) was the direct result of thirty years experience pioneering the use of steel in yacht construction.

Klingel began his career as a naturalist and since he grew up in the Baltimore area he had the opportunity to explore around the Chesapeake Bay.  He knew the Bay from Maryland all the way down to Virginia.  As a boy he had traveled on the steamers with his family from Baltimore to Gwynn’s Island, Virginia where his family vacationed.  He loved this area and would eventually return there to settle permanently.

As a naturalist, Klingel falls into the category of explorer naturalists since he always wanted to see and experience everything first hand.  Aside from his explorations in and around the Chesapeake Bay, he also had a keen interest in the tropics.  As a young man his dream was to sail to distant islands in the West Indies to discover animal species unknown to biologists and to bring back these animal specimens just as Darwin did in the 19th century.   He wanted to carry out a similar mission in the 20th century and set out to do just that.  His first trip to the tropics was to Haiti in 1928/29.  He so enjoyed this first scientific expedition that he wanted to explore other places.

In 1930 he had a sailing ship built especially for a long expedition to the islands of the Caribbean.  His 37-foot sailing yawl, the “Basilisk,” was modeled after Captain Joshua Slocum’s “Spray,” the boat in which Slocum circumnavigated the globe single-handed in 1898.  Gilbert Klingel’s expedition was sponsored by the American Museum of Natural History of New York and the Natural History Society of Maryland and was to have been the first of its kind.  Plans were made to sail from island to island in the West Indies to observe, collect, and gather information on rare species, especially lizards.

Gilbert Klingel’s dream, however, was ruined by rough seas and a jagged coral reef.  Shipwrecked on a desert island, he made the most of this tragic dilemma and discovered a natural world never before described in great detail.  This misadventure later became the basis for his first book Inagua.  He not only took many photographs and brought back many specimens from this expedition, but returned in 1938 to continue where he left off.  This time he brought diving equipment for undersea work to study reefs and marine life.  His observations during this expedition were included in the second part of the Inagua book.

While on this desert-like island he discovered several species of lizard new to science.  Even more impressive, however, were Klingel’s vivid and detailed descriptions of all the creatures he found on this lonely island of the Bahamas.  Among these were roseate spoonbills, hummingbirds, octopuses, sharks, crabs, bats and many-colored fish.  Especially notable, however, are the accounts he gives about the multitude of flamingos found on Inagua at that time.  It has been said that Klingel’s descriptions in the book Inagua rival the best of William Beebe’s Galapagos adventures.

During these expeditions, Klingel took numerous photographs of landscapes and people, as well as the flora and fauna he was studying.  His two trips to Inagua are particularly well-documented.  His superb photography is evidenced in the color slides seen on the InaguaBook.com website.  The black and white photos bring back another era on this nearly forgotten island of Inagua.   His underwater photos were among the first taken by undersea explorers.

Gilbert Klingel was actually a pioneer in underwater exploration.  He came after William Beebe but before Jacques Cousteau.  Beebe began his historic undersea adventures in 1930 in the deep sea diving vessel the Bathysphere.   It wasn’t until 1943 that modern scuba diving was born with the invention of Cousteau’s aqua-lung.  Few may know that in pre-scuba days, it was possible to explore the bottom of the Chesapeake Bay with just a helmet and air-hose or in a pre-Alvin submersible made from an old chemical tank.   In 1933 Klingel constructed a small diving helmet which eventually became known to the scientific community and was commonly used around Solomon’s Island, Maryland.  These helmets could go no deeper than 40 feet and one could stay under only a limited time because of the temperature and the pressure of the water.

By 1935 Klingel’s first underwater diving device, the “Bentharium,” was invented to sit and watch undersea life without suffering from the cold of the depths or from the sting of jelly fishes.  This work was done in cooperation with the Chesapeake Biological Laboratory of Solomon’s Island.  The Bentharium could go as deep as 300 feet.  The Cylinder was suspended under a derrick by a 3,000 pound chain fall.  One man would operate the chain while another is at the pump and speaking tube.  It was constructed of one quarter-inch steel, was 6 feet high and 4 feet 8 inches in diameter.  An ordinary garden hose would convey air into and out of the cylinder.  The exhaust hose was used also as a speaking tube.

Throughout the 1930’s, Klingel continued his research and wrote for natural history journals but it became more and more difficult to finance trips to distant lands.  During the Great Depression, research funds were soon depleted and Klingel found himself jobless.  Out of economic necessity, he was side-tracked into a second occupation as a metallurgist for a large steel company in Baltimore. He remained there from 1941 until he retired in 1963.

All those observations of the Chesapeake Bay resulted in numerous articles for the Baltimore Sun newspaper and ultimately in his second book, The Bay.  It was this book that brought the attention of the National Geographic Society to Gilbert Klingel’s underwater research.  Because of this, they requested his assistance in designing a diving chamber suitable for underwater photography.  Klingel accepted the challenge and in 1952 he constructed a submersible out of steel and called it the “Aquascope.”  After testing it in the clear waters of Florida, the Aquascope was brought up to Gwynn’s Island, Virginia where the photographic expedition took place in 1953.  It was a real challenge to photograph in the murky waters of the Chesapeake Bay but the project was a success.  The results of this research were published in the May 1955 issue of the National Geographic Magazine.  The article was entitled “One Hundred Hours Beneath the Chesapeake.”   The purpose of this project was to have the possibility to observe and photograph life on the Chesapeake Bay floor.  From the Aquascope, National Geographic photographer Willard R. Culver took the first color photographs under the Bay.

The Aquascope is on display at the Calvert Marine Museum on Solomon’s Island in Maryland.  A model of its predecessor, the Bentharium can also be seen there.  The Bentharium was made out of materials on hand when research funds were scarce and times were difficult in the 1930’s.  The Aquascope on the other hand was funded by a grant from the National Geographic Society in the early 1950’s.  By that time, Klingel could build his diving chamber himself out of steel.

It was this knowledge of steel that brought Klingel to a career in boatbuilding.   He was a pioneer in the construction of steel hull sailboats.  The first one was built in 1948 and was actually an experiment on his part.  He had seen a design he liked in the Rudder magazine.  It was an A. Mason Intrepid design for a 30 foot sloop.  Though intended to be built the traditional way in wood, Klingel built one in steel for himself.  The experiment worked and this 30 foot steel hull sloop became so popular that he built many of them over the years.

By the 1960’s his reputation as a boatbuilder had spread throughout the sailing community and orders for larger steel vessels came pouring in.  It was these large vessels that captured the attention of writers and journalists of various magazines and newspapers.  There was the 42 foot steel hulled ketch “D’Vara” built for Stan and Dot Bradfield of Fremantle, Australia.  They had heard of Klingel through a friend in England.  There was the 50 foot Colvin design steel Staysail Schooner, the “Pipistrelle”, the 62 foot twin diesel yacht “Manteo” (based on a shrimper type hull design); and the largest of these steel vessels, the “Clementine,” a 75 foot, 50 ton Gaff Ketch sailboat.

Gilbert Klingel designed and built his last boat in 1977.  This one was for himself.  It was named the “Green Heron” and was nick-named the “Creek Crawler” because it could literally go into shallow creeks where few other sailing vessels dared to go.  The Green Heron is a 30 foot scow motor-sailor with a cambered flat bottom and a 12 inch draft.  This lateen-rigged steel boat takes her inspiration from the Sampans of the Far East.  Klingel had once seen a movie showing a sampan sailing in the Mekong River Delta.  It was from that memory he designed the Green Heron.  The steel hull of this boat could float on a foot of water and if the tide ran out, she could sit upright until the tide came back.  This feature came in very handy during his ventures in the last few years of his life for it was around this time that Klingel retired from boatbuilding.  He could finally find the time to do what he liked best – cruise around the Chesapeake Bay or down the Intracoastal Waterway to Florida.  He could finally explore the many creeks and coves off these waterways without having to hurry back to work on the next order for a custom-made boat.