Inagua is a shipwrecked naturalist’s story of adventure and discovery on a lonely island in the Bahamas. Author Gilbert Klingel and sailing companion Wally Coleman survived ten days of rough seas only to be cast on a coral reef once the storms were over. Here begins a struggle against all odds and the beginning of a Robinson Crusoe lifestyle. Klingel found a natural world never before described in great detail. 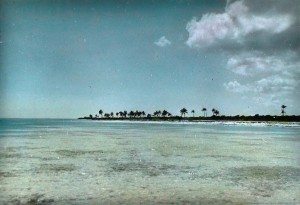 Written with beauty and rare perception, this unusual narrative will delight anyone loving natural history and adventure.  For a sense of the writing, consider this from Chapter 2:

We who live in the heart of great cities, who lead our entire lives in deep straight canyons of brick and stone or on the peaceful meadows of farms, forget in the security of our mode of living that there is a sea, that only a short distance from our Manhattan, Philadelphia or Boston lie miles upon miles of rest- less water, turbulent lonely reaches that stretch away to infinity and beyond. In our complacency we forget that the sea is the greatest geographical feature of the earth and that it has endured unchanged for long ages while continents rose and fell, came into being and disappeared.

The sea is the last wild frontier. Yet here in constant changeful mood, nature reveals the entire scope of her emotions. No sunlit meadow alight with flowers and with gauze-winged insects is more peaceful than a calm ocean, nor is there a land scene more replete with life and vigor than a teeming seascape in the trades where the white caps curling from the tops of the waves hurtle forward and spend themselves in white froth against the dark blue. Then there are the times when Nature, brooding over her wastes, sends the clouds and the fog, deepens the sea tones and spreads a mournful melancholy over the depths. And yet again, the sea is a savage place, she sends the gale screaming from the four corners of the world to remind men that their proper habitat is the land. When this happens the ocean becomes the most awesome spot on earth, a turmoil of mountainous waves, of bubbly froth and swirling breakers.

Only those who have lived through a great storm at sea, who have fought and battled with the ocean on its own terms, can know what this means. 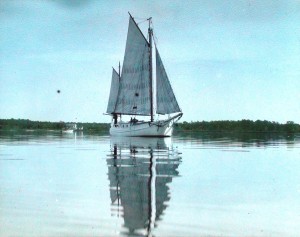 The Basilisk under full sail on a glassy sea

We forgot all this. A deep sense of awareness, once latent but brought to the surface by the leaving behind of land ways, filled our minds as we made ready to go. In the pale gray of early dawn we raised our sails and on the wings of a gentle land breeze slipped out of Hampton Roads. It was chill that morning and very quiet save for the soft hissing of the waves at the
waterline. In the dim haze near Norfolk we could make out the
stark outlines of a large four-master, the schooner Purnell T. White. As we watched, her sails rose, one after the other, stretched taut and filled as she came about.

She was a beautiful thing in the early light, sails all pink with the newly risen sun and white hull glinting against the green water. How could we know that in the short space of eight days this ship would be a sodden helpless wreck or that, three years later, refitted and repaired and once again in service, her captain and crew would all be dead men, lost off the Carolina Capes?

One of the many lizards photographed and catalogued from the expedition

Side by side we put to sea, the towering schooner and the tiny yawl. Our mast hardly reached her railing, or so it seemed, as she swept grandly past and headed for the capes and the rising sun. We watched her go with a feeling of friendly interest, for she was built by the same hand that with such care constructed our tiny ship.

Fifteen miles ahead lay the capes, barely discernible in the haze, and beyond the open sea. Thimble Shoal passed astern and then Willoughby. Gently but swiftly, the promised northwest wind died and left us wallowing. The tide, now at full ebb, began to flow again, carrying us back whence we came. It seemed we were destined to remain permanently in the Chesapeake.